A Good Veggie Burger Amounts to a Hill of Beans One of the more common idioms in English to express contempt or derision is to say that something doesn’t amount to a hill of beans, as if a hill of beans isn’t worth very much.

I have been pleased and surprised to see that the new Southwestern Black Bean burger we have been serving in the Café has been so popular. The number of diners forgoing meat increases every year, and restaurant menus need to evolve and change with the times

In addition to being vegetarian, this black bean burger is vegan and wheat free, and there has been an enormous increase in diners who are vegan and/or avoid gluten. The entire dish is Southwestern in style, and rather than a roll it is served on a crispy corn tortilla, with both a green tomatillo sauce and a more traditional tomato salsa with cilantro, all topped with guacamole

The sauces are essential, because they provide both moisture and sharply contrasting flavors. The combination of the two creates a flavor sensation greater then the sauces separately. Even though sour cream would seem to be a natural component of this dish, and one could easily add it, I omit it just to keep the whole dish vegan.

Two trends are clear in the restaurant business: More and more people are choosing not to eat meat, and the number of glutenfree diners continues to grow. Vegetarian burgers are here to stay. Fortunately, this one is tasty and easy to make. 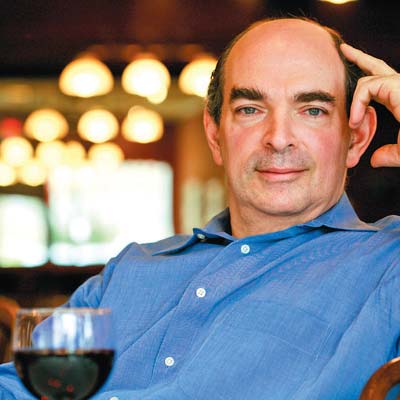 MICHAEL BALLON opened the Castle Street Café in 1989, next to the historic Mahaiwe Theater in downtown Great Barrington. The Café has received rave reviews from the day it opened. Previously, Ballon cooked in New York at Lavin’s, Sofi, Wood’s, the New York City Bar Association and Plums’, a full-service catering company. Michael is also The Roundtable Chef on WAMC public radio and his food essays appear in Berkshire Homestyle Magazine. He was voted Berkshire Grown’s chef of the year in 2000.