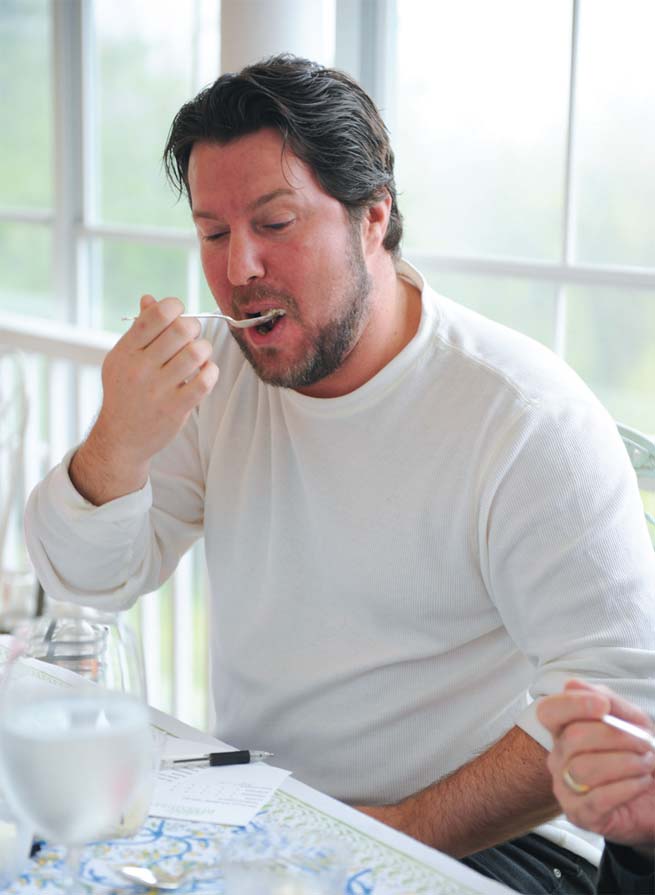 To look. To smell. To taste. These are finely honed tools required for tasting and judging fine wine. So when local sommeliers Caitlin Harrison of Mezze, Luc Chevalier of Blantyre and Dan Thomas of the Red Lion Inn convened for a blind tasting of five different brands of ice cream, they immediately applied their oenophile training. Edible Berkshires asked them to trade corkscrew for spoon to taste and rate the vanilla ice cream from five area brands, and then those same brands’ best sellers, regardless of flavor.

Five cups of ice cream were placed in front of each of them, devoid of labels and therefore devoid of preconceived notions. These judges would have only their keenly trained senses to trust to discern and rate the ice creams on flavor, creaminess and aftertaste.

It began, as wine tastings customarily do, with the whites—in this case, the vanillas. Instinctively each judge raised the ice cream to her or his highly trained nose and almost simultaneously realized that bouquet is not as important as palate when it comes to ice cream. With spoons in hand it was clear that ice cream is all about texture, density and richness.

The judges were also all abuzz about appearance— after all, impression always influences taste. The ice creams were labeled 1 through 5. The vanilla color spectrum ranged from a creamy pale yellow to nearly pure white. What did the color reveal about the ingredients? Number 1 was described as fresh, raw and earthy—like you could taste the grass. Would it surprise you if that was the creamy pale-yellow ice cream? Would it surprise you further to learn that the yellow color is a result of the particular time in the season when the cows switch from eating hay to grass? Who said there’s no terroir in ice cream?

As the ice cream tempered (aka, softened), the subtle flavors released and the judges began to refine their opinions. Caitlin not only wanted to buy a gallon of number 3, she described it as “feminine, like wearing a sundress waist-high in sunflowers.” And number 2 was described as having a precise flavor that doesn’t stay with you.

Next up: each brand’s best selling flavor, again coyly identified only by numbers 1 through 5. Judges were asked to rate them on the same criteria plus the “wow factor.” The flavors included chocolate, espresso, maple and fudge. As part of the exercise, the judges were even asked to name the ice cream.

Things became more intense. What were the subtle flavors and nuances? Without the crutch of being told the flavor, an interesting phenomenon occurred: taste memory kicked in. Dan burst out, “Number 1 reminds me of a Fudgesicle” as he was transported to that treat on a stick from his childhood. Another ice cream was described as “You know, ice cream in a cup with a wooden spoon.”

Which one won? In the Vanilla Taste-Off , Golden Organics won in all categories: flavor, creaminess and aftertaste. In fact, Caitlin will be buying a gallon of it real soon! And among the bestsellers, the runaway winner in all criteria was SoCo’s Dirty Chocolate.

The judges left sober and smiling—and, I am guessing, thinking as I am right now: Th ere is nothing more evocative of a summer evening than licking a melting ice cream cone on your porch or strolling down Main Street or even at a drive-in soft-serve parlor. Forget the judging! All ice creams are winners when summertime memories are being made. We offer our heartfelt thanks to all the judges who participated in our first taste test and hope that the judge who did not show up is alive and hopefully sober.

Additionally, thank you to the farms, dairies and producers of all the wonderful ice cream treats available to us locally, especially our taste test participants: Gould Farm, Bart’s Homemade, Golden Organics, Maple Valley and SoCo Creamery.