Ancient practice is good for the earth, your garden, your belly

For many of us, the gardening season starts in January with a seed order. We stack up catalogs and sit for hours, reading descriptions of juicy tomatoes, sweet carrots and crispy lettuce. Plant listings are often short stories that spin tales of taste. After all, when you’re growing your own vegetables, flavor is important.

When you grow heirloom vegetables—those that have been passed along from one generation to the next—you’re also participating in the story of the seed. Take, for example, Lina Sisco’s Bird Egg bean, which is offered by Seed Savers Exchange in Decorah, Iowa.

Lina Sisco was one of the original members of Seed Savers Exchange, and her grandmother brought the bean to Missouri in a covered wagon, sometime in the 1880s. Just imagine the trip that bean took (never mind what Lina’s grandmother must have endured), the number of times it’s been saved and its off spring planted since then, one year after the next, until finally it ends up in your garden. By growing that bean and saving it for next year’s garden, you become a part of that history.

Most seeds, though, have a much less interesting story. It’s less about triumph and tragedy and more about dollars and cents. Most commercially produced seeds are not heirlooms; they’re hybrids. That means they were produced by crossing two different varieties so they’ll produce vegetables that have a particular combination of traits—shape, color, disease resistance. Hybrids aren’t necessarily bad; you just can’t save their seeds. As with human children, with hybrids you can’t be sure of getting seedlings that have the same traits as their parents.

Why else should you think about growing heirlooms and saving their seeds? It’s one key to creating a sustainable future for ourselves. After all, imagine not having to place a seed order each January, because you’ve saved all the seed you need from last summer’s garden.

You’re not only making yourself more self-reliant, you’re also ensuring that the particular genes in Lina Sisco’s Bird Egg beans are around for another generation. You’re keeping alive a strand of biodiversity in a world that is rapidly becoming less diverse. That’s a great story to be a part of.

Heirloom beans like Lina Sisco’s Bird Egg are the easiest kind of seeds to start saving. First, let the beans fully ripen on the vine. Th e pods will be full and heavy; the beans themselves will be so mature and starchy, you wouldn’t think of eating them fresh. Once the pods turn brown and dry, pull up the whole plant and hang it in a dry place out of the sun for a few weeks. Shell the beans and store them in an airtight container.

High Mowing Seeds
(an organic seed company with many heirloom
offerings, based in Vermont)

Seed to Seed by Suzanne Ashworth 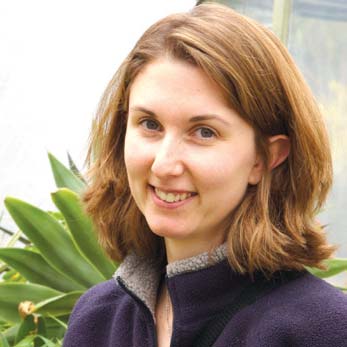 CARLEEN MADIGAN is a gardening editor at Storey Publishing in North Adams. Carleen compiled and edited The Backyard Homestead, a do-it-yourself guide to show you how it’s done.