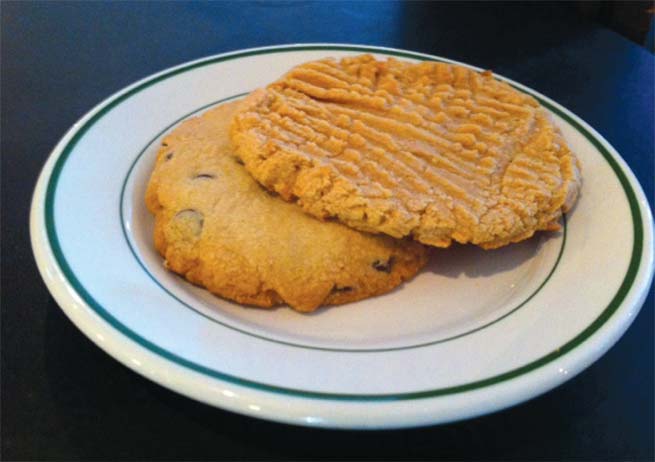 For those who by choice or necessity must avoid gluten (a protein found in some forms of wheat, rye and barley) in their diet, life without bread, cookies and cake can seem pretty sad. Often it seems that gluten-free options are not worth the effort of eating. But increasingly, with some care and attention, gluten-free baked goods are achieving results to challenge their gluten-containing cousins. Recently I went on a mission to find a few good local sources.

First stop was the charming Irving Farm Coffee House on Main Street in Millerton. Their excellent coffee is roasted just down the road, but I was there for a retake of the gluten-free peanut butter cookies, which I’d happened on by chance one day before a matinee next door at the Millerton Moviehouse. I was struck by how delicious (read, gluten-like!) they were—often, gluten-free cookies and pastries can have a sandy or cardboard texture or have an aftertaste from the gum or gums (usually xanthan) used with the flour to give structure in the absence of gluten’s protein.

Baker Stephanie Caul told me that after training at the Cordon Bleu in Boston she began trying gluten-free baking just from a general interest in healthy eating. Her first effort was a gluten-free banana muffin, and the feedback was so positive—and mostly from people eating gluten-free by choice rather than necessity—that she decided to explore further. At first, Stephanie used her own mix of Bob’s Red Mill flours with her gluten-based recipes, with a lot of trial and error and some mixed results. Then Irving Farm’s wholesaler began supplying a gluten-free flour mix (smallest available is four-pound bags from Abundant Life Foods; AbundantLifeFoods.com) already containing an optimal balance of flours and gums necessary for taste and structure. Substituting it one-to-one in her gluten-based recipes Stephanie has seen consistent good results.

Once you have the flour mix of your choice, Stephanie advises adding a bit more fat than you would use for gluten baking, and mix by hand to avoid the toughness that can result from over-mixing the glutenless flours. She notes that many customers are asking for gluten free by choice, not necessity, and that the gluten-free products Irving Farm offers are not produced in a gluten-free facility and thus would not be appropriate for those with celiac disease or extreme gluten allergies. Stephanie will take special orders for as few as a couple of muffins or cookies. Along with peanut butter, cookies are available in chocolate chip, double chocolate walnut, toasted walnut blondies and a white chocolate cranberry cookie bar; her muffins include morning glory, banana or just about any variety; pound cakes come in almond, blueberry and espresso chocolate chip. While I was there a hot-from-the-oven banana bread came out—just the thing with a cup of Harney tea or Irving Farm coffee. She is experimenting with scones and cupcakes, and would like to add gluten-free bread to the menu, but their oven space is limited—and making worthwhile bread may be the last frontier in gluten-free baking. Manhattan residents and travelers beware: The three Irving Farm branches there outsource their baked goods. (Irving Farm Coffee Roasters; 518.789.2020; IrvingFarm.com)

Next up was one of my personal bread meccas: Berkshire Mountain Bakery in Housatonic, Massachusetts, housed in a mill warehouse turned European-style bakery and store. The ciabatta! The panettone and holiday bread! The croissants that rival the best I had in Paris … but alas, that was when I could digest gluten. Baker and owner Richard Bourdin, who has been perfecting his craft for a few decades now, gave me a condensed, colorful history of bread making and what he sees to be the issue with gluten.

There is a good reason it is so difficult to make risen gluten-free bread to rival gluten-containing bread. While pastry is basically sugar, fat and protein (usually eggs), with flour to hold it together, requiring its own particular skill from a baker, bread is a complex alchemy of grains, fermentation, and heat, with gluten playing a critical role. While many blame the wheat itself, citing modifications of the past half century that increased productivity and resistance to rust disease, for Richard the problem lies in automation and related alterations of baking. “It’s the process,” he says.

In the last 100 years, the increased use of yeast eliminated the need for sourdough starters, which naturally provide the lactic acid that breaks down the phytic acid in wheat, in effect releasing access to nutrients for human digestion. And in the last 50 years, as dough machines became stronger and demand greater, water was removed from the mix in order to decrease the stickiness and ease handling of doughs, further reducing digestibility of grains. To give an example, Berkshire Mountain Bakery’s sourdough breads use about a 90%– 100%, or 1:1 water to flour ratio; on a recent visit to Whole Foods, the baker there told Richard that he was unable to go above 68% water for their yeasted, whole-grain variety.

The advent of yeast and automation means a loss of the art of bread making, as well as a loss of nutrition, Richard believes; even socalled artisanal breads are somewhat “dead” products, less digestible and with nutrients not fully, if at all, accessible to human digestive systems. Over time, this could cause what we are seeing as an increase in gluten sensitivity or intolerance. Once the body recognizes this form of dehydrated, yeasted gluten as hard to digest, it begins to reject it in all its forms.

While there are no gluten-free offerings at Berkshire Mountain Bakery (except for some of the wonderful soups, tapenades and spreads now available) there are breads and pizza crusts made with spelt—an ancient form of wheat that contains less gluten than other wheats and may be digestible for some who are gluten sensitive, but not for those suffering from celiac disease. Richard has experimented making gluten-free breads using a rice flour starter—a variation of a sourdough starter—and psyllium husks to thicken, with good results. He does not foresee making gluten-free breads beyond in-house consumption—but perhaps with encouragement we could change his mind, at least for special orders. His daughter, Marta, says they have inquiries just about daily for gluten-free products. (Berkshire Mountain Bakery; 413.274.3412; BerkshireMountainBakery.com)

Guido’s carries a good selection of gluten-free flours and mixes, including Bob’s and King Arthur. If you are using gluten-based recipes it is largely trial and error when replacing the flour with glutenfree, and you will probably need some sort of gum in the mix. For a ready mix for muffins and some of the best pancakes ever, try Pamela’s Baking and Pancake Mix. The Sami’s line of bread, sourdough or millet, found frozen at Guido’s and Hawthorne Valley Farm Store, make good toast, BLTs and grilled cheese, and their crackers—plain, garlic, chia seed or cinnamon—are favorites and loved by gluten consumers as well. (Guido’s Great Barrington, 413.528.9255; Pittsfield 413.442.9912; GuidosFreshMarketplace.com; Hawthorne Valley Farm Store, 518.672.7500; HawthorneValleyFarm.org/farm-store)

If you’re ready to try gluten free at home, here is Stephanie’s banana muffin recipe, which also happens to be vegan. Enjoy!

Brigid Dorsey writes and cooks in Columbia County. She honed her knowledge of food, life and driving in Paris. Read more of her work, and see her locally sourced jelly and preserves, les collines, at thelifeipicked.com