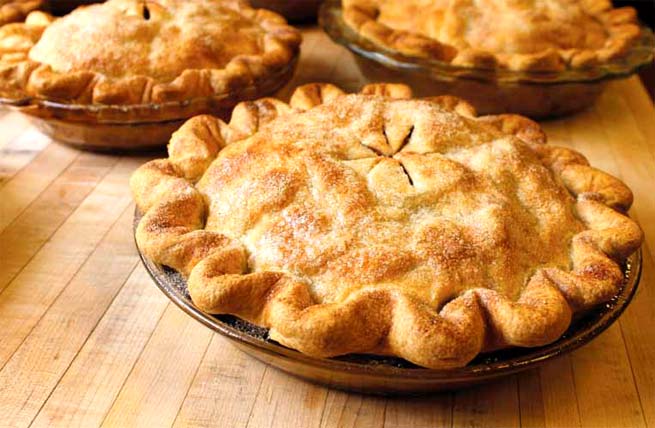 President Calvin Coolidge said he never ate anything half as good as the pork apple pies his stepmother made. One hopes he and Mrs. Coolidge tried the Red Lion Inn apple pie on one of their visits. We bet it’s every bit as good as his mom’s.

Place apples in a large bowl. Combine 1 cup of the sugar and the cinnamon and add to the apples. Toss until well mixed.

Fill the unbaked pie shell with the apple mixture, and dot with the butter. Fit the top crust over the filling, and crimp the top and bottom edges together to seal the apples in.

Whisk together the egg and the milk. Brush the top crust with this egg wash and sprinkle with the remaining 1 tablespoon sugar. Pierce the top crust in several places with a sharp knife.

Blend the butter and shortening together with a wooden spoon in a small bowl.

Sift the flour and salt together into a large bowl. Cut in the butter and shortening, using a pastry blender or two knives, until the mixture resembles cornmeal. Add the cold milk and blend until absorbed. Divide the dough in half and roll each half into a ball. Wrap them in plastic wrap and refrigerate until chilled, about 30 minutes. (Or, if using a food processor, place the butter, shortening, flour and salt in the bowl; fit with a steel blade. Process until the mixture reaches the consistency of cornmeal. With the processor on, add the milk slowly through the funnel until the dough forms a ball.)

When you are ready to bake the pie, roll each half of the chilled dough out on a floured board until it is slightly larger than the pie plate.

Fit one half into the pie plate, place a filling inside, add the top crust, and flute the edges together.