This is such an easy and delicious way to enjoy beets. Of course, you can buy pickled beets at the store, but they’re so easy to make with ingredients that you probably already have on hand that there’s no sense in spending money for the jarred version. I love to serve these with toasted bread, grainy mustard, garden carrots and cured olives. On a cool, crisp day, there’s nothing better than enjoying these by a fire with a nice glass of wine (and maybe do it while wearing sweatpants!). Terry Moore’s Old Mill in South Egremont has attracted locals and tourists for decades. The restaurant feels like the 1800s and its menu ranges from steaks and chops to shrimp curry and rainbow trout. Terry often lists his chicken liver mousse on the menu of first courses. It’s a classic, comforting appetizer especially popular during the holiday season. P

Preheat oven to 300° and place roasting pan with 1 inch of water on rack (water bath).

Chill 6 (4-ounce) ramekins and then brush liberally with melted butter.

Blend until … Read the rest Stuffed fruits are very common in Mediterranean cooking. Serve them as a snack or an aperitif, as a first dish or as a side dish. Use firm fruits to avoid their falling apart while cooking. Because apple and pears when cut fresh tend to get darker due to oxidation, blanch them immediately with lemon or white wine when handling. Here is a recipe for a baked pear, using the advantage of the fabulous taste of Berkshire Blue cheese.

Set pears in a baking dish with their open sides up. Pour wine on and around the pears. Sprinkle nutmeg on the pears. Cover the baking … Read the rest

Mix the spices together with the oil at the bottom of a medium bowl. Put the seeds in the mixture and toss so all of the seeds are coated. Lay out on a baking sheet and place in oven at 350° for about 35 minutes, tossing occasionally. Let cool and store in an airtight container. 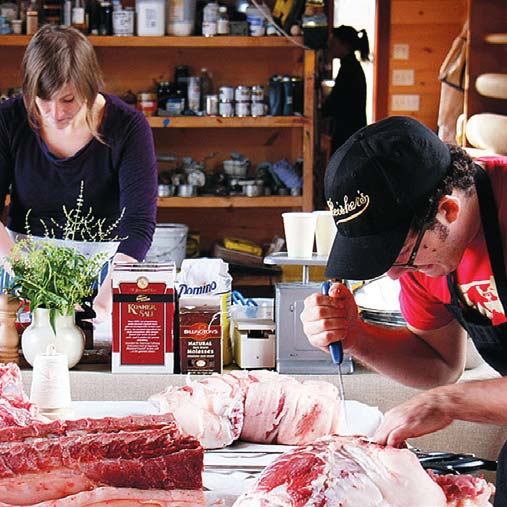 JAKE LEVIN is a trained nose-to-tail butcher/artist who loves to cook. SILKA GLANZMAN is a designer/crafter who loves to bake. Together, they spend their time talking about, shopping for, preparing and enjoying seasonal and local food. Read more at TheButcherAndTheBaker.com.